Powering Up for the Future

Projections indicate that new electric vehicles will account for more than half of new vehicle sales in the U.S. by 2030, according to a recent report from Bloomberg. This is a marked increase from 2021 sales, where electric vehicles accounted for roughly 3.4 percent of new car sales. As the auto industry is adapting to environmental concerns, Oakwood is responding as well.

“We’ve been getting a lot of questions about electric vehicles and charging capabilities from residents in the past few years,” Dave Bertsch, Vice President of Facilities and Construction at Oakwood, explains.

Until about a year ago, there wasn’t specific demand for charging stations on the Oakwood campuses, though the topic had been brought up in concept numerous times. Many residents had been coming to Oakwood with hybrid vehicles, but none that required charging.

Chuck and Helen Read were among the first Oakwood residents to own a fully electric vehicle that required a charging station.

“We initially set out to buy a plug-in hybrid, like a Prius,” Chuck states. “We had a Prius that we liked very much, but they stopped making that model and when we went to the dealership, they were not particularly encouraging about the prospects of getting more in.”

After that, they started looking at fully electric vehicles and, in assessing the pros and cons, decided to plug in.

The Reads ended up purchasing a Tesla Model Y and have been very pleased. Even throughout their numerous cross-country trips, Chuck says charging stations are easy to find, thanks to navigation within the Tesla, as well as various apps that identify charging stations.

After the Reads purchased their car, they used charging stations around Madison, and even a standard outlet in the heated underground Oakwood parking garage. However, this wasn’t an ideal option, as it means charging had to occur overnight because it’s a slow process. Eventually, Chuck approached Dave about installing charging stations at Oakwood.

“We anticipated this need,” Dave says, “So we had done some homework and explored options and locations for charging stations on campus.”

Dave worked with MG&E, a local utility provider, and took advantage of a promotional program to have two rapid chargers installed on the University Woods campus at essentially no cost to Oakwood.

“We had to bear the cost of the installation and run some new lines to the chargers, but that cost was minimal,” Dave points out.

On the Prairie Ridge campus, one charger was installed in the heated underground parking garage beneath The Grasslands. The Facility Services team is currently evaluating where to install additional chargers that would be accessible to residents living in Pioneer Prairie and Settlers Ridge, the two original apartment buildings on campus.

Once appropriate locations have been identified and the infrastructure is in place, it doesn’t take long to acquire and install the chargers, Dave explains. The primary challenge is identifying accessible locations in the underground parking garages that can accommodate use by multiple vehicles.

“There aren’t a lot of open parking stalls under most of our buildings,” Dave says. “Another option we are exploring is placing new charging stations outdoors and making them available to anyone–both residents and guests. We haven’t quite gotten to that point yet, and that would require a different type of charger, but we’re preparing for the increased demand. When new residents moving into Prairie Ridge own an electric vehicle, or a resident currently living in Pioneer Prairie or Settlers Ridge purchases an electric vehicle, we’ll be prepared to accommodate them.”

Residents wishing to use the existing charging stations at Oakwood pay a $25 monthly fee for unlimited use of the chargers and receive a key which unlocks the charging units.

As Oakwood continually invests in improvements on its two campuses, considerations of how to be environmentally conscious and more sustainable from an energy consumption standpoint are always part of the conversation. A respect for nature and an investment in the grounds and surrounding environment is a core part of Oakwood’s identity.

Both campuses have active resident “Green Committees” composed of talented and engaged residents. The two groups have started cross-campus collaborations and are supported by Facilities Services staff. According to Dave, “their knowledge and passion leads to increased awareness and improved planning from an administration perspective.” 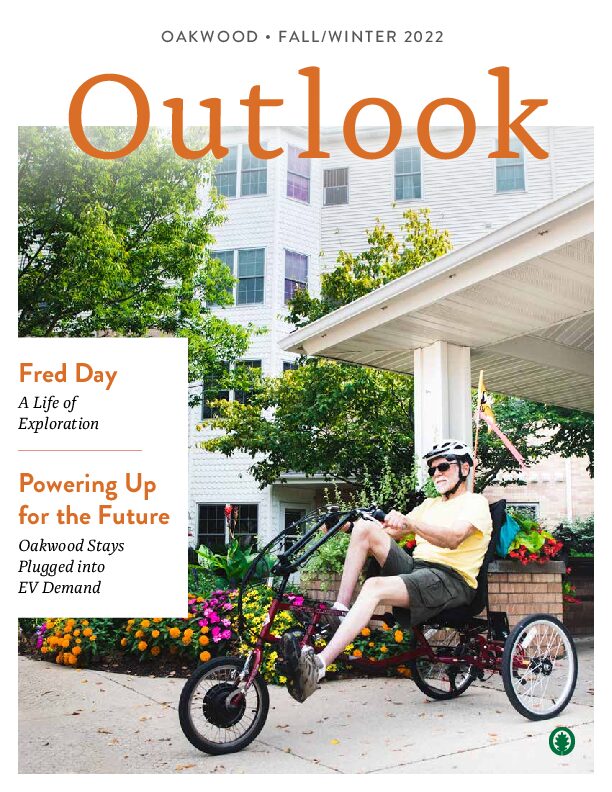 Thanks for reading! This is just one of many articles from our Fall/Winter 2022 Outlook newsletter.

To read more from this issue, download the PDF by clicking the button below.